Cerebral palsy (CP) is defined as a non-progressive neuromotor disorder of cerebral origin. Motor disorders of CP are often accompanied by disturbances of sensation, perception, cognition, communication and behavior.

Spastic Cerebral Palsy  accounts for a major portion of Cerebral Palsy. In India, the prevalence of CP is estimated around 3 cases per 1000 live births. There is no known cure for all four subtypes of CP.

Cerebral Palsy – According to Ayurveda

Spastic CP can be considered as ‘Avarana janya vata vyadhi/Kaphavrita vata’. Vata vyadhi is the most similar condition to CP.

According to some authors, Cerebral palsy  in Ayurveda can be considered as ‘Shiro-Marmabhigathaja Bala Vata Vyadhi’. 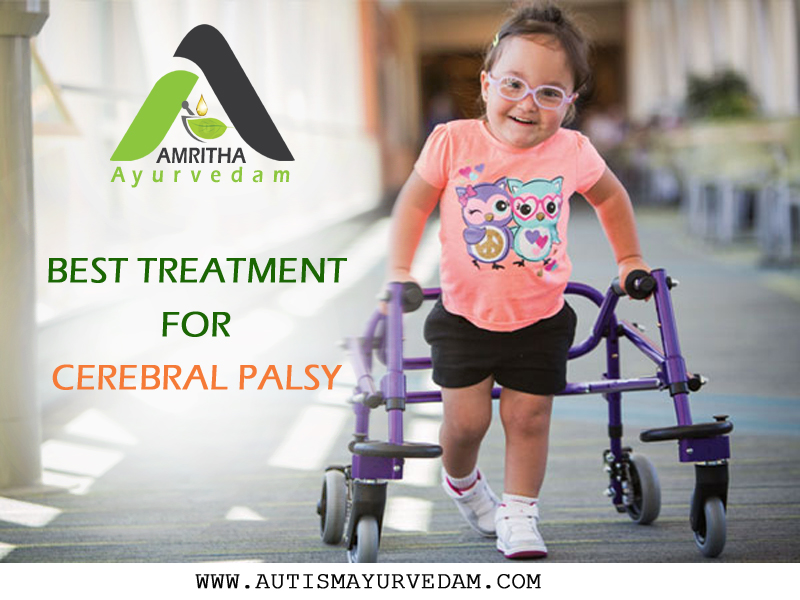 Ayurvedic Panchakarma (five major ayurvedic procedures and many allied procedures which are intended to cleanse the body) therapy along with appropriate internal medication can provide good improvement in quality of life of Cerebral Palsy patients.

It is well known fact that internal medication along with Panchakarma   procedures is more effective when compared with only oral medications.

Panchakarma is a collective term which indicates five major therapeutic procedures of detoxification to cleanse the body channels, along with many other supportive procedures.

Primarily, these practices are aimed at eliminating ama (toxins) from to body and cleanse the channels. Each procedure is performed in three phases: Poorva karma (preparatory methods), Pradhana karma (main procedure) and Paschat karma (post-cleansing procedures which include dietary and behavioural regimen).

Panchakarma is the ultimate mind body healing experience for detoxification of the body, for strengthening the immune system, to restore the balance and wellbeing.

It is one of the most effective healing modality of ayurveda. Ayurveda considers that the purification of the body is important before the commencement of any other therapy.

Various panchakarma procedures have proved their efficacy in the management of CP. Udwartana opens the minute channels and improves blood as well as lymphatic circulation. Udwartana is kapha, vata hara and removes aavarana or srotorodha.

Vasti  is the major treatment for Cerebral Palsy and it improves gross as well as fine motor functions, provides nourishment, improves overall general condition and quality of life in children with Cerebral palsy.

According to the acharyas udwartana brings lightness in the body or limbs and especially useful in flaccidity in Cerebral Palsy cases.

Whereas procedures like sarvanga abhyanga, baashpa & naadi sweda, SSPS and matra vasti are beneficial in reducing the spasticity like scissoring phenomenon, improves mobility or flexibility of joints, improves gross and fine motor functions, and quality of life .